When calving out cows, a majority of operators calve in the months of January – March. We have found that calving for a 45 day period starting in late April is a system that works very well for us. It’s beneficial in more ways that we can describe, but one main advantage is that our cows can be calving out on green pasture (as opposed to penned up in lots). We have found this reduces their stress, increases well being, and is more conducive to what would happen if they weren’t in a domesticated environment. 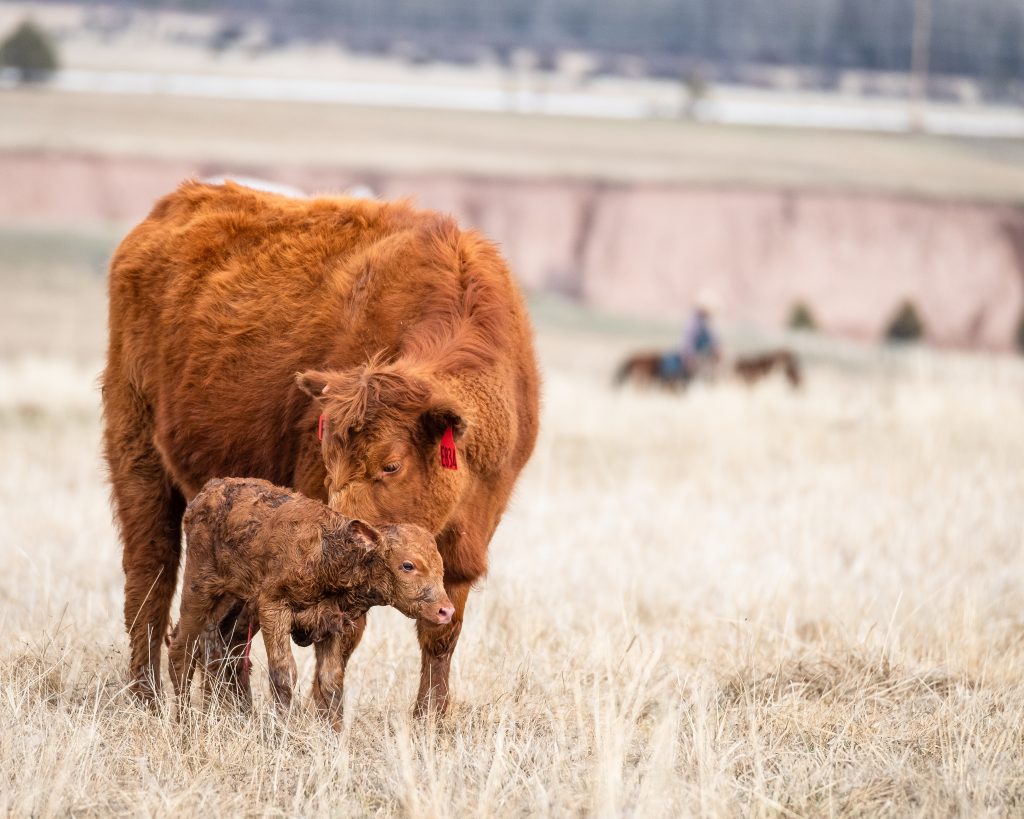 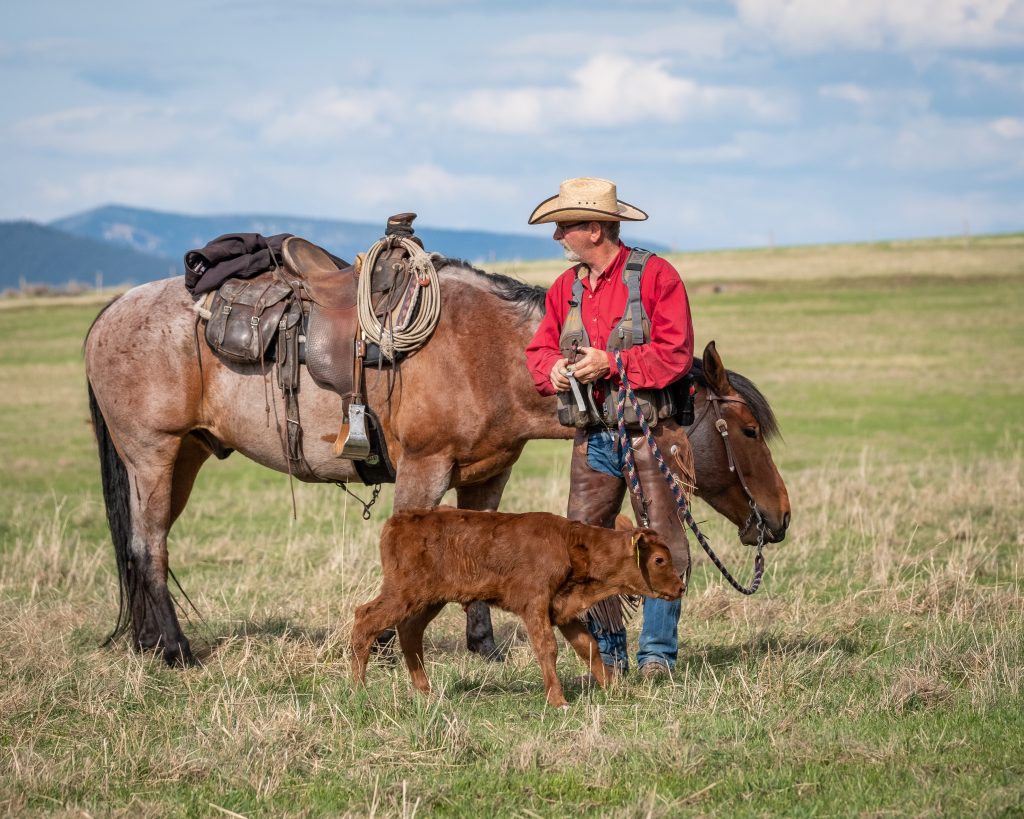 When calving our cows, we have found that using the Sandhills calving system has been integral in reducing sickness and possibly death in our newborn calves. The principles behind this concept are as follows:

The idea behind the Sandhills calving system is that cows are calving in a “clean” pasture and we are preventing direct contact between younger and older calves. This limits the exposure of later born calves from being exposed to an accumulation of pathogens in the environment which reduces chances of sickness.

When people think of branding they think of livestock having an identifying mark put on them which is distinctive to the particular ranch the animals belong to. To us, branding is more than that, it’s a time when we can look over the cattle to check for any issues as well as give yearly vaccinations.

On branding days we work our cattle very early in the morning, as it’s cooler out. We bring in a smaller group of cattle and sort the calves off of the cows. We then work both cows and calves at the same time as we try to get done as quickly as possible to minimize the time the pairs are separated from each other. 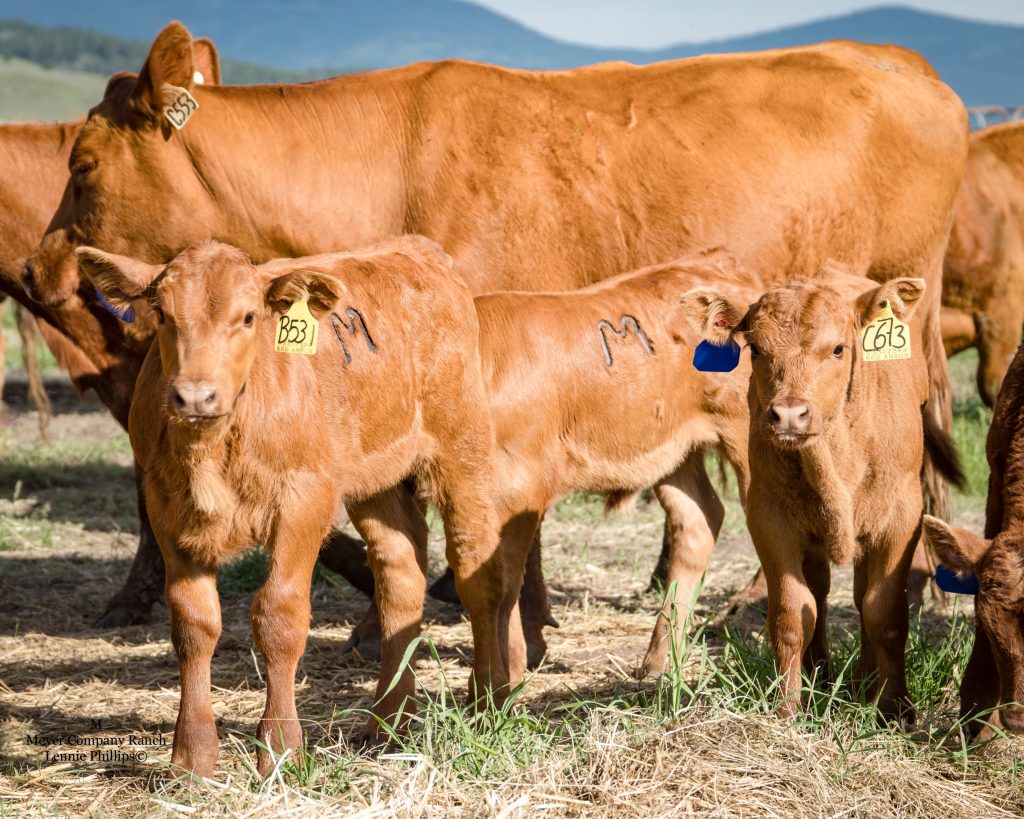 The cows and the calves both get vaccinations for several different preventable diseases as well as wormed and insect control. All calves will get a brand and male calves will get castrated. Immediately upon being finished the cows and calves are put back in the same pasture together. As calves generally go back to the last place they were with the cow, allowing them back in to the pasture they came from helps them to pair up quicker.

We then ride through the cattle to ensure all the calves are again paired up with their respective cow and look for any potential issue that might have resulted from the vaccinations.

We wean our calves from our cows in mid-October of the calves’ first year of life, with the exact date depending on environmental factors and conditions that come with each changing year. We fence line wean whenever possible—however, we’re not always able to do so when running the amount of cow calf pairs that we do. Fence line weaning is when you have the cows and calves all in one pasture, you then move the cows into the next pasture while leaving the calves. This is very low stress and when it’s done correctly neither the cow nor calf notices much difference from their normal day to day activities. After approximately a week of the cows and calves living side-by-side but in separate pastures, the calves are then brought to the ranch for back grounding. 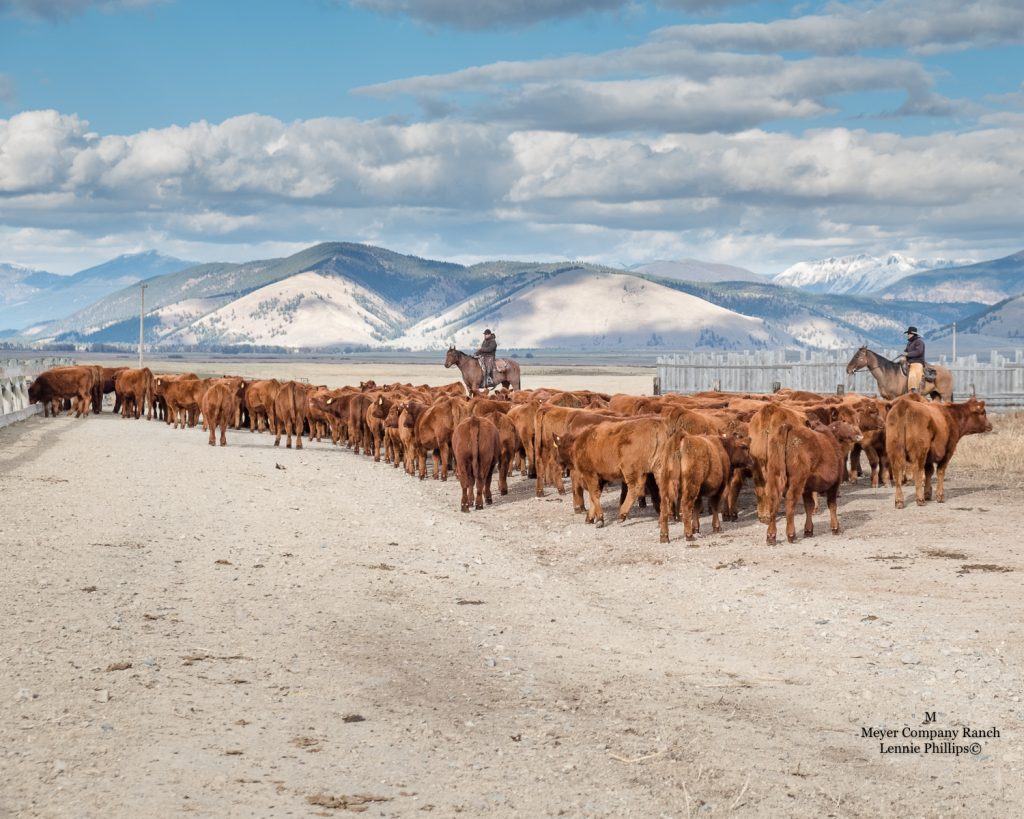 Back grounding entails feeding the calves in pens twice a day while riding through them to check for sickness. We keep the calves in this environment for approximately 45 days before they are shipped off the ranch where they will be fed until they are ready to go into the Meyer Natural Angus program.

Before we ship out the calves we will go through the heifers and pick replacements. For those who aren’t familiar with the term, it’s meaning is exactly as it sounds. It’s picking females to keep in herd and replace the older cattle that have “fallen out” due to a variety of reasons including but not limited to age and fertility. The number of replacements we keep varies from year to year depending on how many of the older cattle fall out. 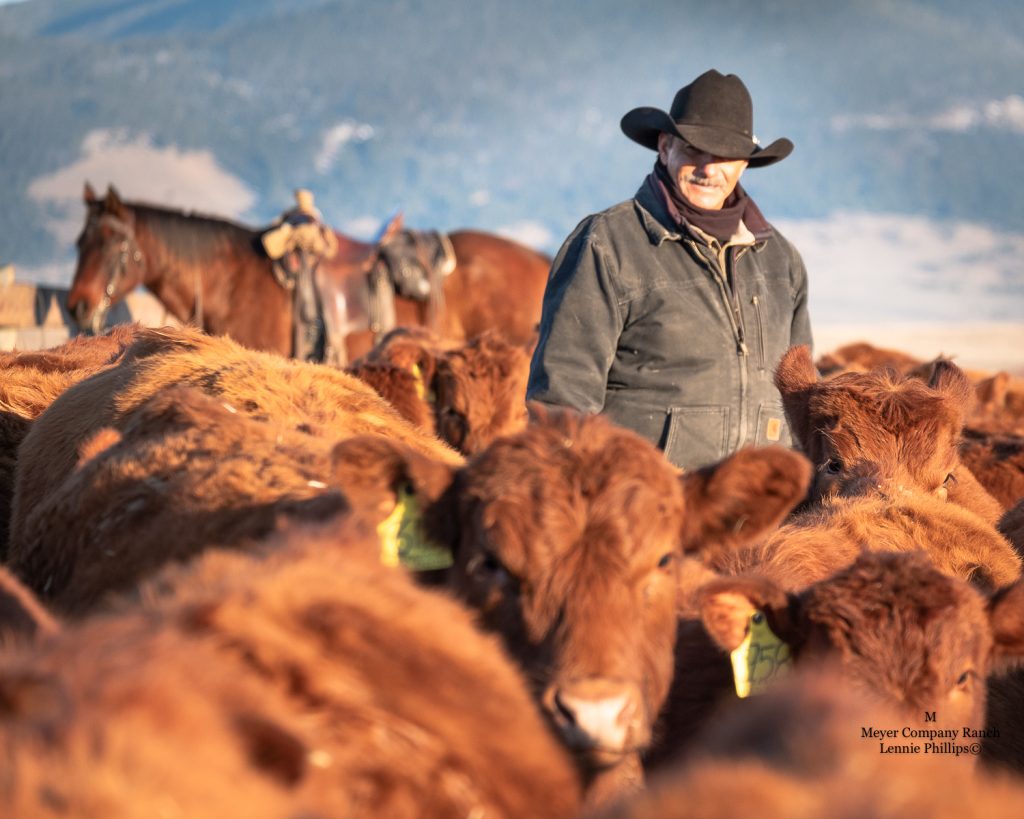 Most people can attest to the fact that record keeping is extremely important, whether in day to day activities or in overall management of your job and family life. At the ranch, we keep records on several different levels. Whether it’s the number of head of cattle moved from one pasture to another, how much seed we planted or what was served for lunch that day. Record keeping encompasses every facet of ranch life.

One area in particular that record keeping is of the utmost importance is with our cattle herd. We use the AIMS (Angus Information Management System) for our cattle record keeping. This program is put out by the Angus Association of America, however if you are a member of their association you can also use the program. We have found it to be one of the better programs available (at this time) as we feel the area of cattle computerized management is severely lacking.

All of our cattle our entered in the AIMS program where we keep track of everything from calving and breeding to weights and health. We are able to export spreadsheets out of the AIMS program and then upload them to a tablet. We then use the tablet out in the field to record all the necessary data particular to the work we are doing with that group of cattle on that particular day. When we get back in the office, we can upload the data from our tablet to our computer and save it on there as an excel spreadsheet. We still need to manually enter the data into AIMS however we’re hoping one day they will have the ability to do a direct upload into their system. Until then, this system works very well for us and we will keep trying to find ways to streamline the process. 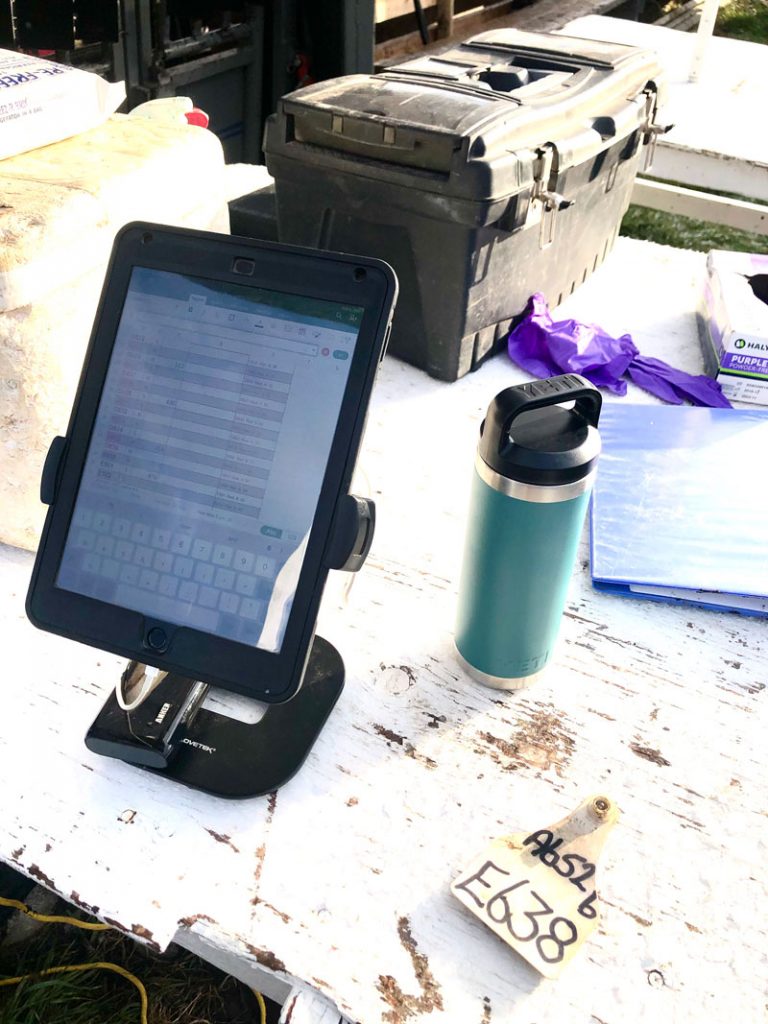 Along with the humane handling principles, we have implemented one of the more recent humane handling methods called the Bud Box. The Bud Box was invented by Bud Williams with the idea behind the design being to work with cattle’s natural instinct rather than against it. To effectively use a Bud Box, a person needs to understand two distinct cattle behaviors. One—when blocked, cattle want to return to where they came from, and two—animals prefer to go around something they feel pressure from. For examples on how a Bud box works here’s links to two different videos we made. One video is of using the Bud box on horseback and the other is while using it on foot.

Let us start off by saying that not all cattle chutes are created equal, which is why we feel the silencer chute deserves it’s own recognition in regards to humane handling. The silencer is a hydraulic chute that has a mechanical tail gate, side squeeze, head catch as well as front bars to assist in doctoring. We have 2 silencer chutes, one chute stays permanently at the main ranch in our vet barn. The other chute we move to the respective part of the ranch where we are working cattle. When we are finished we bring the chute back to the main ranch and store it under cover until is needed again. The chute is quiet so does not scare cattle, it is quick so allows for ease of use and it doesn’t choke an animal so it’s very safe no matter what kind of cattle you are putting in it. 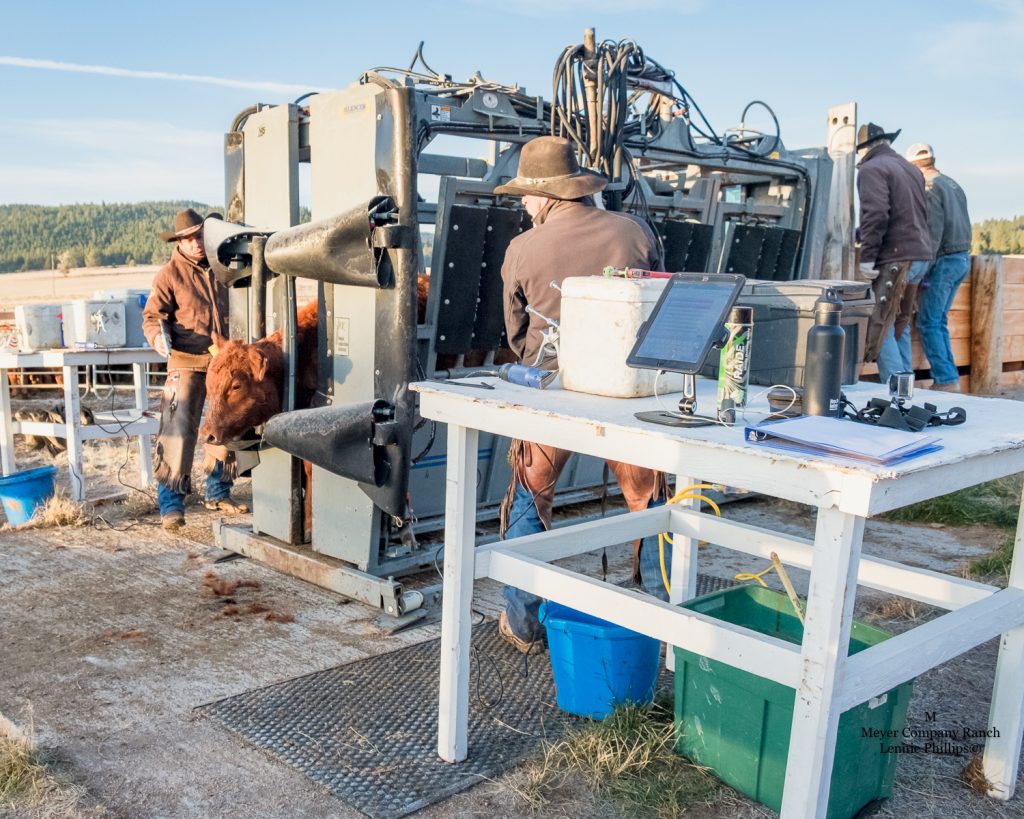 As we’re a natural outfit- meaning as a rule we don’t give our cattle any antibiotics – situations do occur when we need to doctor our cattle. Our first choice is to try and utilize antibiotic free products, however sometimes in order to minimize the suffering of an animal antibiotics is the only choice. The animals that do need to be doctored in this manner then get a green button in their ear, this signifies they had antibiotics. We also record this information in our cattle management system and each animal that has a green button will get culled off separately, as they won’t go into the Meyer Natural Angus program. 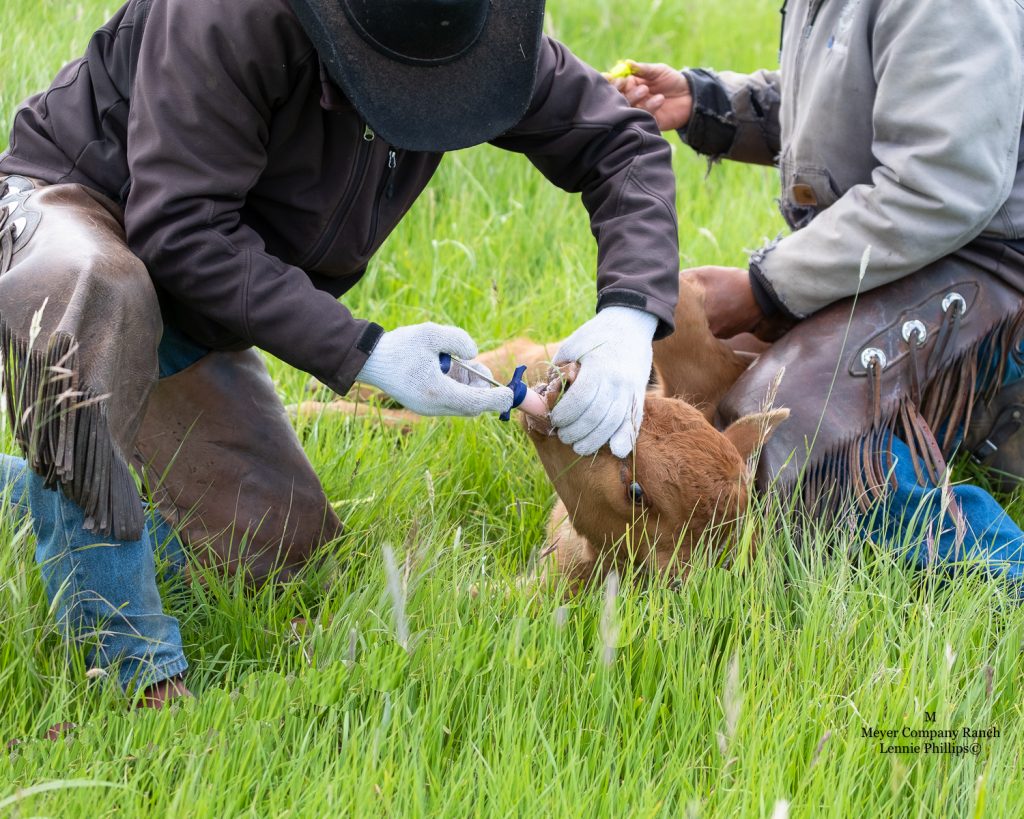